Your page? Unpause your account to remove this banner.

To speak German,
you have to start speaking it.
… and also you need a real challenge. Bitte schön! 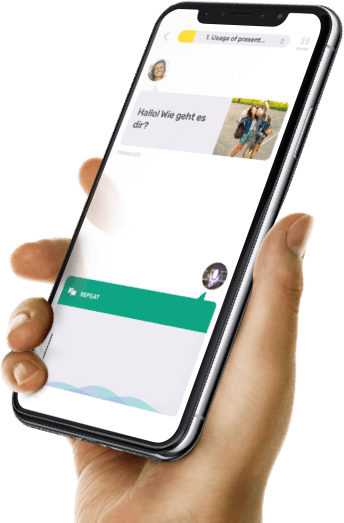 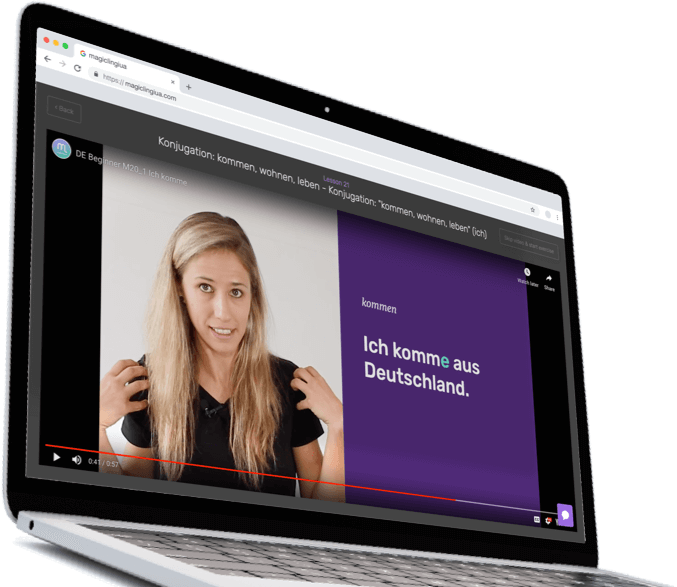 Hurry up - the first 100 students receive a FREE 1-on-1 tutoring session via video chat.

brought to you by

Language learning built for
your tongue not your thumb

Join this challenge and...
You'll start to speak German in
Full Sentences from day one.
This is how your life will change in just 10 weeks from now:
CUSTOM JAVASCRIPT / HTML
Have real German conversations
with anyone
without fear
CUSTOM JAVASCRIPT / HTML
Be confident where ever you travel
and find your
way around
CUSTOM JAVASCRIPT / HTML
Make new friends and
feel at home
like you are
one them
... and all this without worrying about grammar all the time.  You won’t feel strange and you won’t have to translate in your head anymore.
That's what we want to happen for you. And if you join this challenge, we know you can do it... even if right now you still think this sounds like a far-fetched dream!
Let us show you how this 10-week Challenge we will make you speak:
By joining this 10-Week
German Challenge you will get:
250+ video
lessons
both in German and English
2500+ voice-recognition
speaking exercises
10 One-on-One sessions
with native Germans

Weekly
video meet-up
with your peers and coach

Available on the web, your smartphone and tablet

Enroll now Limited spots available
This will work for you, even if you...
How do I know?
Because I have created the Magiclingua method from years of experience of learning and speaking German while being a foreigner living in Germany.... 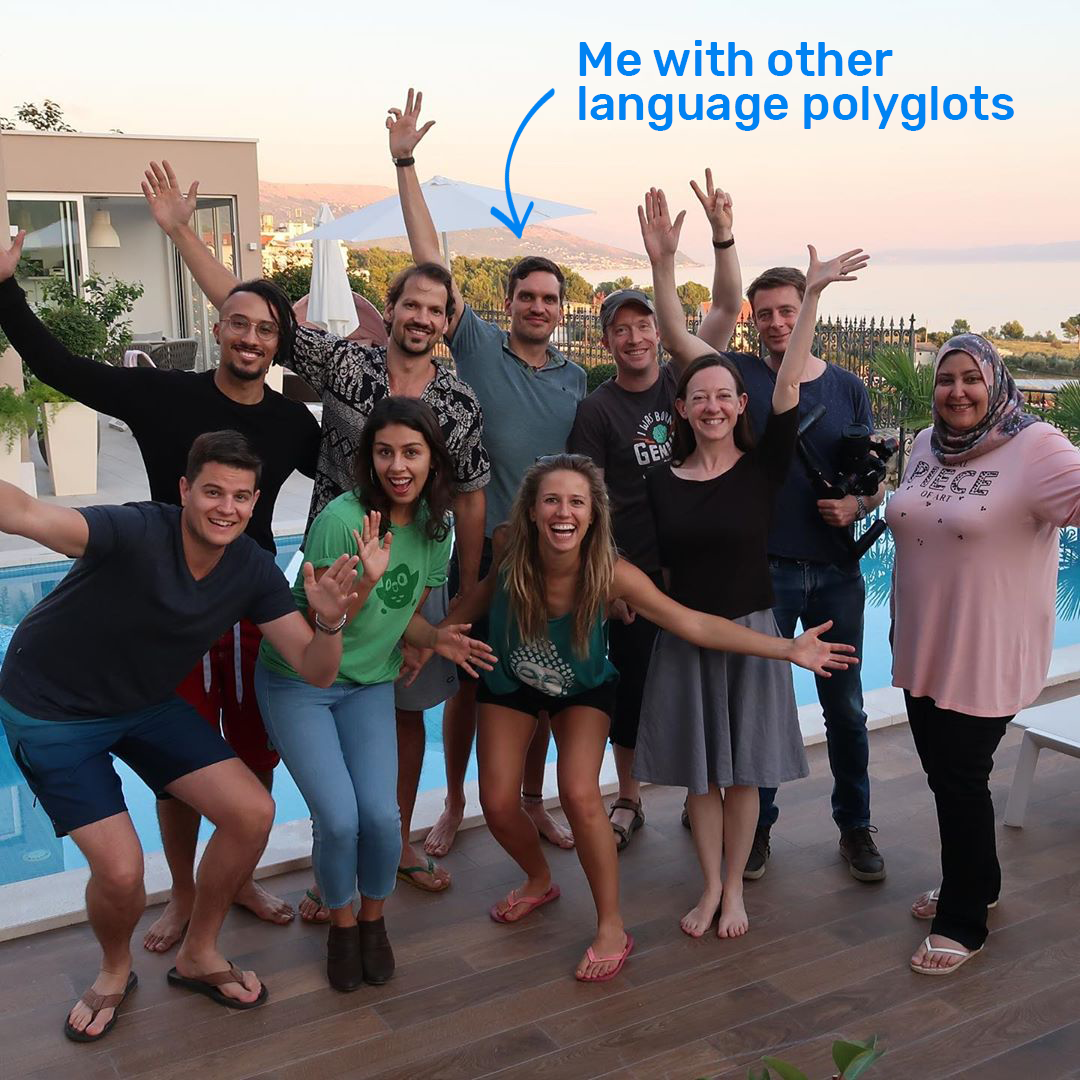 Hey, my name is Silver,
and not too long ago I was just like you...
Let me tell you a quick story about the time I planned to move to Germany but had no German language skills at all.
I started off with classical self-study methods spending hours on filling in blanks and answering multiple-choice questions. But I was struggling to practice my German. I had no one to talk to.
I felt that I was learning words but anytime I had to speak, I would be blocked because I just couldn't get out proper sentences. And I was afraid that I would be making mistakes.
You see, the problem I had was that I was in a vicious circle. I could not speak, so I was not getting speaking practice. And because I was not able to get speaking practice, my German skills did not improve.
As you can imagine, I was desperate, but I wasn't ready to give up on my dream of being able to feel confident and making Germany my new home.
That was when I had my big a-ha moment.
I realized that I had to break out of this circle and get into a regular speaking and conversion mode - meaning I had to create a new habit of speaking German and ignore my fear of making mistakes. And guess what? I started to speak.
That's when I realized it wasn't my fault! I was failing because although my goal was to speak German, I was doing everything else but that. No wonder I was struggling.
I used what I discovered to build the unique Magiclingua Method over the past 3 years.
Here is why it works so well...
We'll build your conversation habit
because it is the #1 key to speaking German fluently.
You see, when it comes to learning anything in life, may it be a language like German, playing the piano or dancing, when you practice regularly you will become really good at it.
This is science and it has been proven - not only by scientist - but I have experienced it myself when I was learning German.
So we have created the Magiclingua method to help you break through speaking barriers and build up your conversation habit in this 10 weeks challenge and after. That is our secret sauce.
Yes, I want to speak German Join now - Limited spots available
How it works

How many times have you wished for a simple explanation of how things work in another language? Or even better, to have them explained by a teacher who’s a native speaker?
Those short explanations will give you all the grammar you need to start speaking another language.  Nothing more, nothing less. Also, learning in small chunks will boost your efficiency while mastering a new language.
Our language instructors will guide you through the whole course and keep you motivated with their energy and personality.

Step #2
Practice speaking while
no one else listens

After the video tutorial, it’s your turn to speak! You can apply what you’ve learned immediately.  This will help you retain it much better. Our smart conversation bot will be patient, won't judge you and will let you practice as long as you want without any fear or awkwardness.

Nothing can ever replace a real-life conversation!
And now that you’ve gained enough confidence to know what to say and how to say it, you’re ready to chat with native speakers without fear of embarrassment. This means you’ll be able to enjoy your session from the beginning to the end. Our tutor sessions last 30 minutes. During each session, you will speak in dialogs, describe images and listen to how spoken language sounds.

⋆⋆⋆ Free Bonus ⋆⋆⋆
Meet your peers and coach on a weekly Q&A video call.
Ask anything and keep each other motivated

As a lone fighter, any undertaking is difficult; we know that all too well. That's why we want to give you this extremely valuable free bonus: a weekly video call with your fellow learners and the coach after each unit to exchange experiences, ask questions and get a motivation boost for the next week.
Take advantage of this great opportunity regularly. Not only will you be able to complete this challenge with ease, but also learn even more nuances of the language and meet language lovers from around the world.
This is what our students say 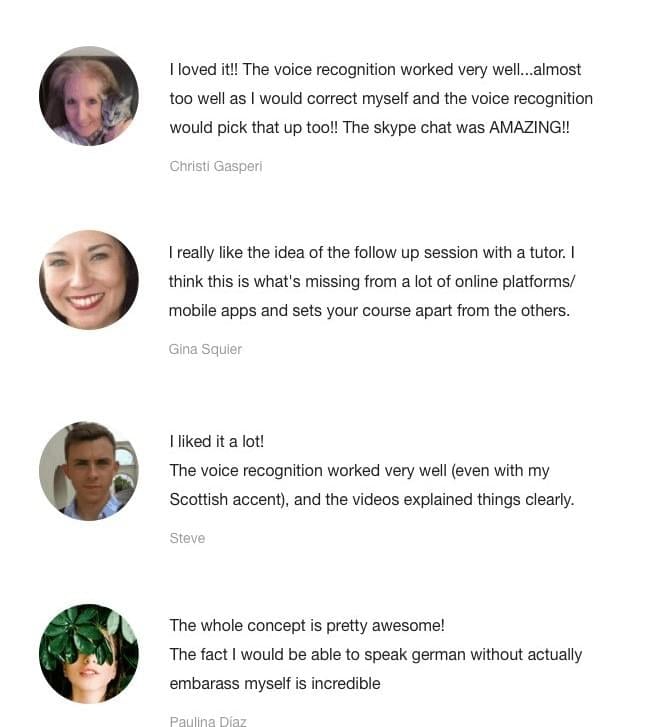 Leo learning German:
"With other apps, you're stuck with the basics for ages. With Magiclingua, you’ll move fast and feel real progress literally every day."
Enroll now Limited spots available
Your German instructors 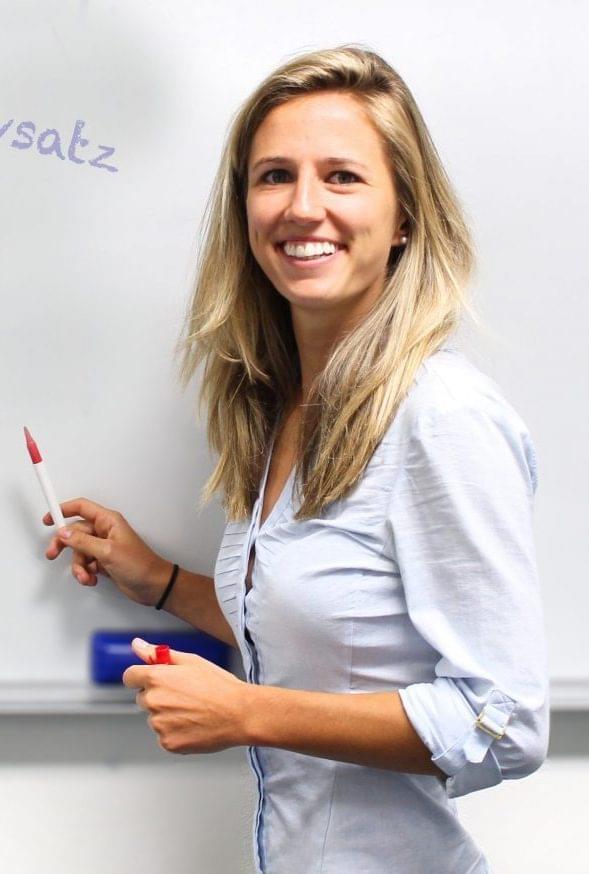 “This 10 week challenge is the result of many years of teaching experience“
Anja has produced videos for learning German for many years, and is extremely popular with our students for her funny but clear teaching.
She has worked previously as a certified German teacher. All our tutors are native German speakers, and know exactly how to bring you to the next level.

Your 10-Weeks Challenge Program Outline
✓ You will learn to handle all the important real-life conversations with ease.
✓ All lessons are organised in small chunks and you can follow them week by week.
✓ We help you to get into your conversation habit and make you master German nearly "automagically" ;)

We offer two levels: Beginner and Intermediate.
We will help you determine your level after your enrollment.
However, you can still decide for yourself later.
Beginner level
Intermediate level 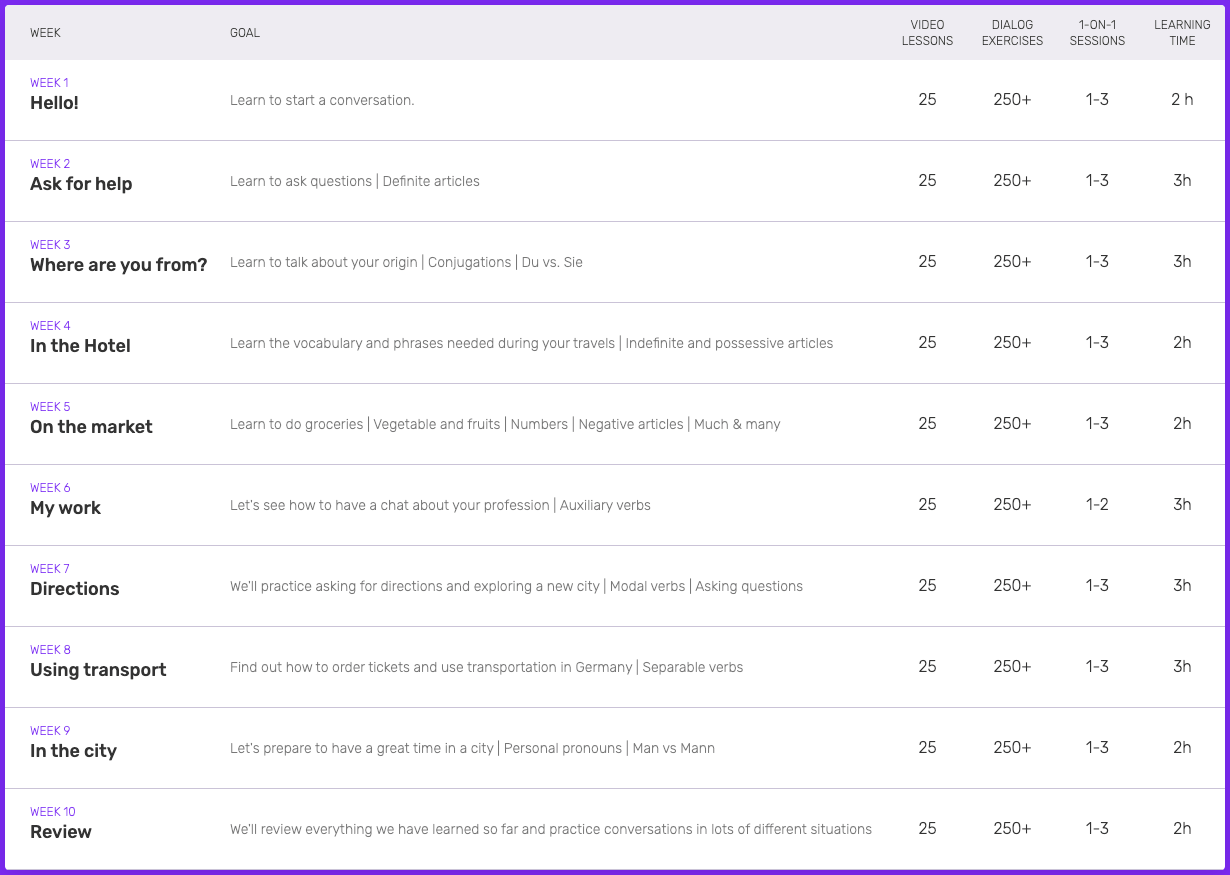 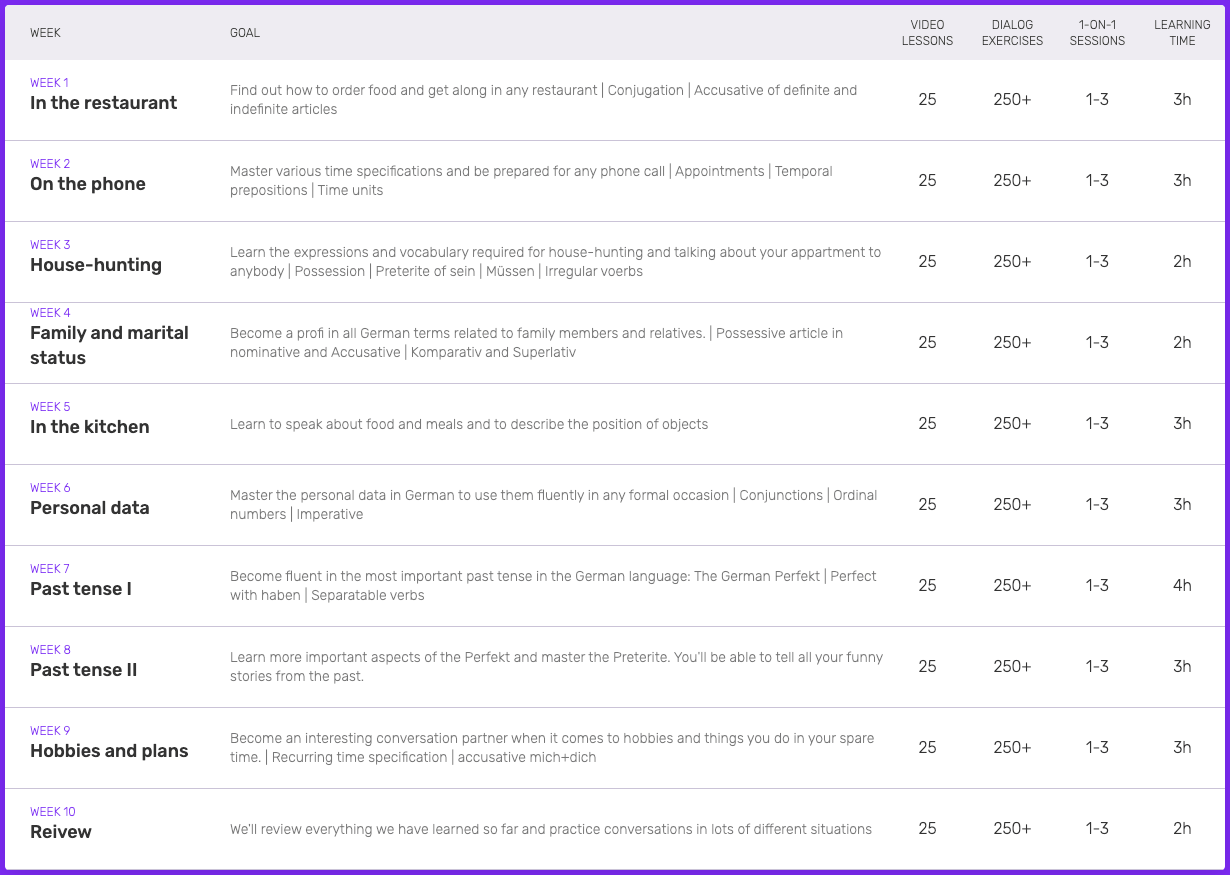 Challenge facts at a glance
LEVEL
Beginner or Intermediate. You choose!

We're so confident you’ll make great progress that we
offer you a money back guarantee if you don’t. 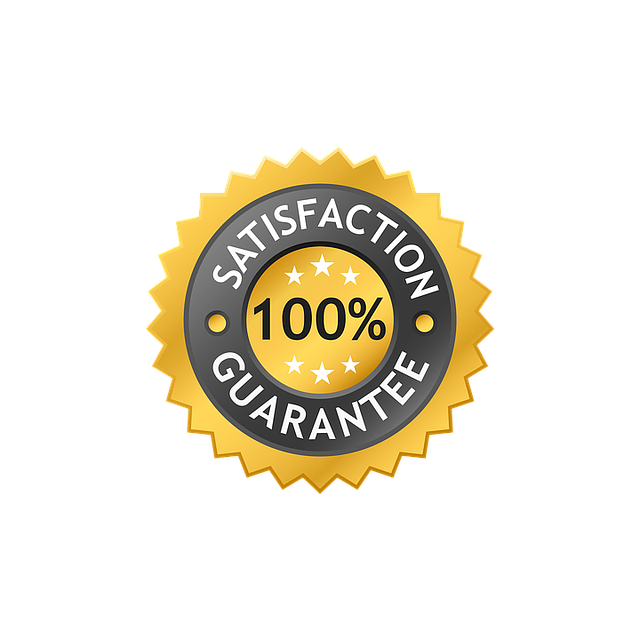 We really want to see you succeed. If you go through the program and complete all speaking exercises you’ll get so much speaking practice that you’ll feel confident having a 15 minutes conversation in German.
Whether you pick the package with or without tutors, at the end of the program you’ll have a final conversation over video-chat with your personal coach.
If you feel this challenge didn’t help you to get your German to the next level you get your money back!

You have nothing to lose, only amazing new language skills and a transformed “German life" to gain…
If you're ready to get started, just click the button below!
Enroll Now Limited spots available

Exclusive offer For our subscribers

Single-time payment (no instalments)
Pay once and keep access to the course contents forever
Enroll Now
Frequently Asked Questions
View FAQ here
Can the AI conversation partner understand me?
Yes, our speech recognition models are trained to recognize even strong accents. Just as when you speak to real people in real life, the AI will understand you better if you try to pronounce all words correctly. If your AI partner understands you, then real humans will, too.
Your AI conversation partner will accept almost any answer that makes sense given the asked question. You can even use slang. However, it's very polite and doesn't like bad words :)
Who are the tutors?
Our tutors are native speakers. We only accept tutors after meeting them in person to make sure they are open people and have good pronunciation and a neutral accent.
What if I miss one week of practice?
If you are busy and can't keep up with the weekly practice, there is no need to worry. The materials will be still all accessible and you can catch up later!
Can I access the materials after the challenge?

Yes, absolutely. The challenge gives you guidance and helps you to stay motivated. If you however want to go through it all on your own later once again, you are free to do so
Will it improve my pronounciation?
Yes. You will hear your language instructor pronounce every word you need multiple times in the videos. In the dialogues with AI you will also hear the correct pronunciation repeatedly.
Our AI conversation partner is based on the latest voice synthesis technology that is constantly developing and being refined to sound even more human-like.
Are mobile apps supported?
Yes. We have both an Android and iOS app that you can use on your smartphone or tablet.
Do I need to install any additional software?
No, our web app works on every major browser without any additional software or hardware. You just need a stable internet connection.
If you are serious about learning German
this will be the best decision you have ever made
Reserve your seat today Limited spots available
Reserve your spot now!
Enrollment closes soon
Hurry up - the first 100 students receive a FREE 1-on-1 tutoring session via video chat.
Here is one more thing we'd like to tell you... 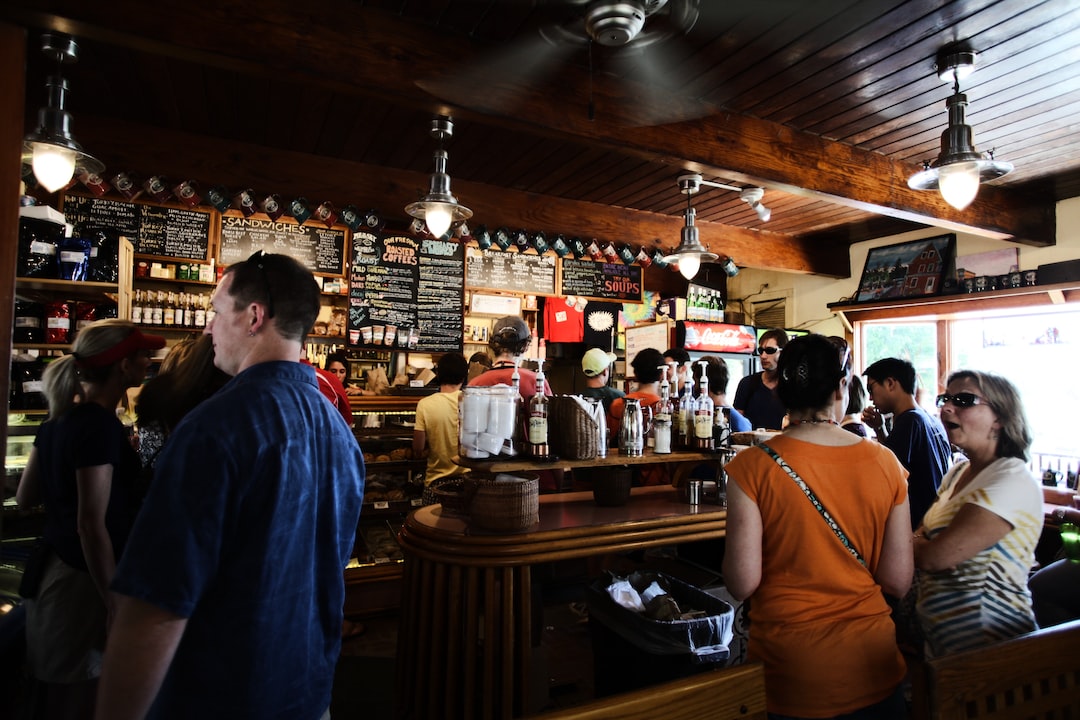 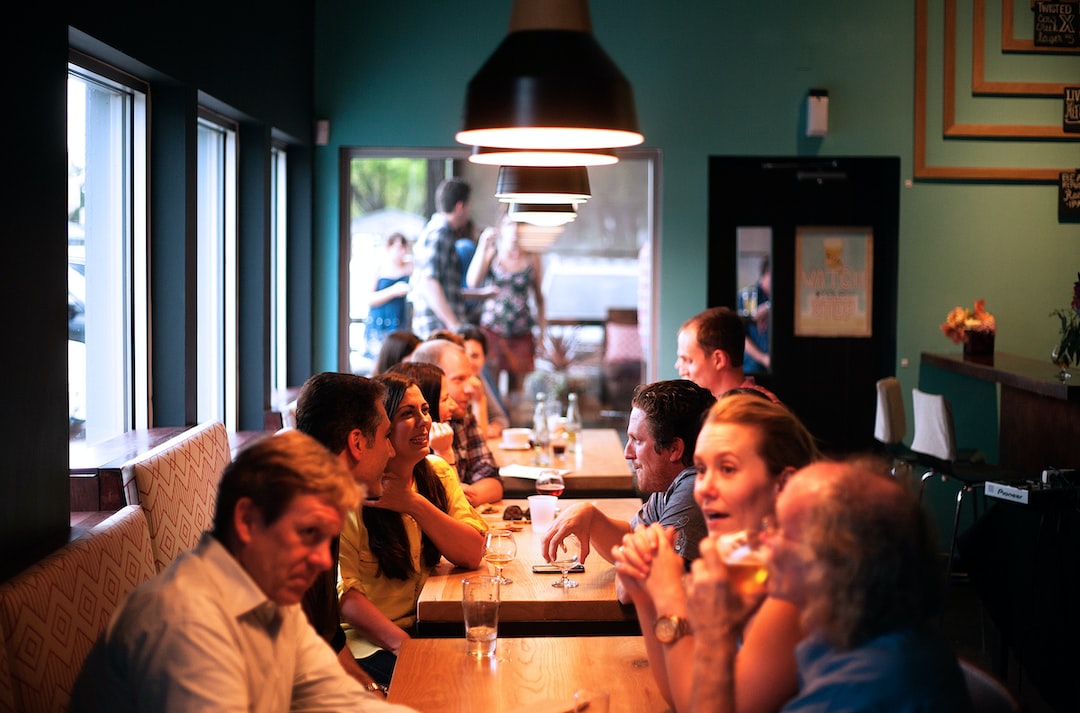 By enrolling for this 10-week challenge you will get an additional free gift.
We would like to invite you to our quarterly "German Learner Meetup in Berlin". We really like to connect with our students and will build a great community of German learners. This something we have always dreamed of.
So if you'd like to meet all the other students in person, as well as your tutors and the founders of Magiclingua, we can't wait to see you then.
The exact date, time and location of the meetup will be announced once the 10-week challenge is completed.
And now we are looking forward to seeing you inside the challenge. Let's go :)
Enroll for 10-Weeks Challenge Now Limited spots available